Jake Jeffries led the San Mateo varsity track teams at Menlo Atherton HS by setting a SMHS school record in the 300m hurdles (36”) while taking second place in the event at the PAL Championship meet Saturday. Jeffries time of 39.71 was over a second better than his previous best in the event and just one hundredth of a second behind the winning time. In addition to qualifying for the CCS regional meet in the 300 hurdles, Jeffries ran another PR and qualified in the 100m hurdles with a 3rd place finish at PAL. Earlier in the day he teamed up with RJ Broussard, Drake Kapoor and Kevin Grant to take 4th place in the 4x100m relay, which also qualified the sprint team for the CCS meet.

On the women’s side, Sabrina Jin and Evelyn Contreras took 2nd and 4th place respectively in the long jump to qualify for CCS.  Jin also qualified a week earlier in the triple jump taking 2nd in PAL. Mallorie Jenne will join them at CCS with her strong performance in the 1600m. In the final few meters she sprinted past the fourth place finisher to take a 3rd.  Jenne also ran the 3200 taking 7that PAL.  One other top 10 result was posted by Marina Fess who tied for 6thin women’s pole vault. 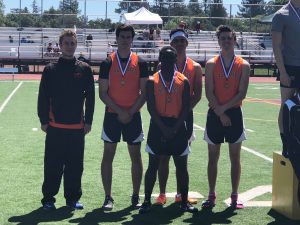