The Bearcat Track and Field teams finally got a meet under their belts Saturday after the recent inclement weather cancelled their first few scheduled meets.  Not all the athletes attended the Castro Valley Invitational as not all the usual events were run, but the Bearcats shined in several events, especially the Pole Vault. For varsity, Ariel Blemur took 3rd for the men while Madelyn Delaney placed 2nd for the women. At the Frosh-Soph level, Trevor Wong and Sven Kagedal placed 2nd and 3rd respectively for the men and Audrey Morganstern took 2nd for the women. Both Wong and Morganstern are freshmen.

Defending PAL 300m Hurdles champion Jake Jeffries started his season right where he left off winning the same race at Castro Valley. A standout day for the Frosh-Soph women was had by Akanesi Hafoka in the throws, placing 3rd in the discus and 4th in the shot put. In the Frosh-Soph 100m sprint Lucas Castillo took 5th in the men’s and Nina Ofitserova took 4th in the women’s. Nina also led the 4×100 relay team to a 1st place win. The meet included shuttle relays and SHMS performed especially well in the 200x200x400x800. The men brought home gold while the women captured a bronze. 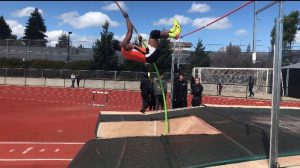